I believe in the unknown

I believe in the incomprehensible

I believe in the invisible

Everything arises from a paradox.

Derrick De Kerkhove during a Seminar in Bordeaux in 2006 stated that the geographic expansion of our thought goes well beyond our national boundaries: this would happen in an unconscious way, even though he urges that we should have to go over the notions of consciousness and unconsciousness. According to this, we’re living in a world where we constantly face globalization and cannot escape a global dimension of being anymore.

There we thus assist to a “modelling” of affection, to a collective synchronization that makes us simultaneously go through the scientific progress and its failures, within a sort of joint consciousness.

The web, the social networks and GoogleEarth have overexposed the individual in the last decades, providing us with the chance of being always visible and present, ready to receive messages and communicate, further to offering a watchful eye on what once were the insurmountable limits of human perception.

Science progress is getting to “science fiction”, with no attention to ethical and scientific limitations or to side effects induced by accelerated progress.

This preamble being, we could be prone to think that technology and science are undergoing a time of “Enlightenment” clearness, that researchers and scholars are progressing under the guidance of true knowledge and farsightedness.

In fact, according to Paul Virilio what we’re undergoing is a real getting back to researching the invisible, to bearing out what cannot be verified, to a Faith into what cannot be either seen or touched.

Virilio thinks that scientists are nowadays involved with the investigation of the dark matter and its relevant hidden energy (the particle of God and antimatter – Cern, Geneva), thus accepting all that is not perceived and not expected rather than what is visible and clear.

Such is the paradox, then: in so a highly computerized, globalized and technological society, energies are being spent towards the intangible realm, and science thus becomes a science fiction narration in which everything is revisited and recreated, as if previous findings could bear no value in comparison with all the new ones that could possibly change or even shake the socio-cultural and environmental balances.

A clear will to manipulate the very nature of things under this intention is apparent, in order to re-create an “other” history and an “other” planet through programmes and applications.

My project originates here: from a sort of collective sensitiveness, that can eventually approach a clear resolution only within the intangibility of Faith or the unconsciousness necessary to re-map the historical and geographical properties of the whole planet.

Revisiting the collective tragedies and faithfully watching over the unknown world presented by science fiction.

The video artworks Stars (2003) and Earth (2010) are a part of this project I’ve been working on for many years, related to the technological gaps affecting the human unconsciousness.

Stars seem to be dealing with a starry sky, that in fact is a starry sky colliding into the viewer, or ever a never-ending rain of missiles. The usual poetry of the falling star and relevant message of good omen is distorted into a message of total war and mass destruction. The sky has become a dangerous and deadly place.

Earth presents a post-atomic scenery instead, in which technology is spying on science and no longer able to control its catastrophic side effects; in which media overexposure is a way of controlling and scheduling all individuals; in which nature has partially survived but lost energy; in which everything is standing still.

There we assist to the image of a dying planet, and mankind is upside-down looking at this disquieting prospect bound to the unknown, to the darkness, and cannot help but be fascinated by this new tech Faith.

Cosmic Strip
This the new story, the new Holy scripture, presenting astronauts and satellites as the new spiritual guides and the cathedrals of such a new Faith devoted to the unknown and incomprehensible. 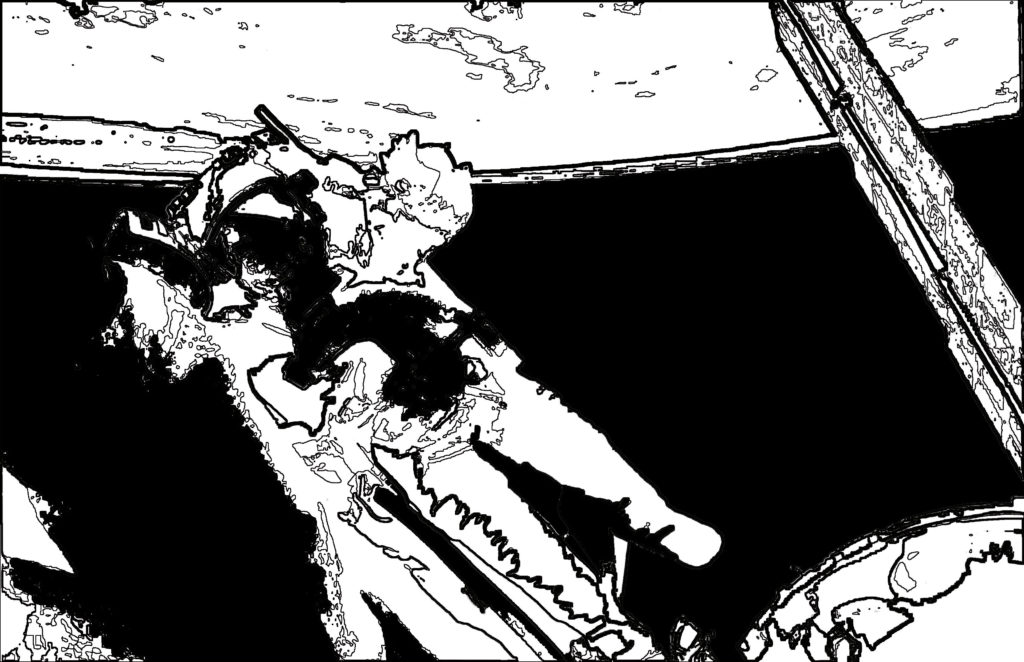 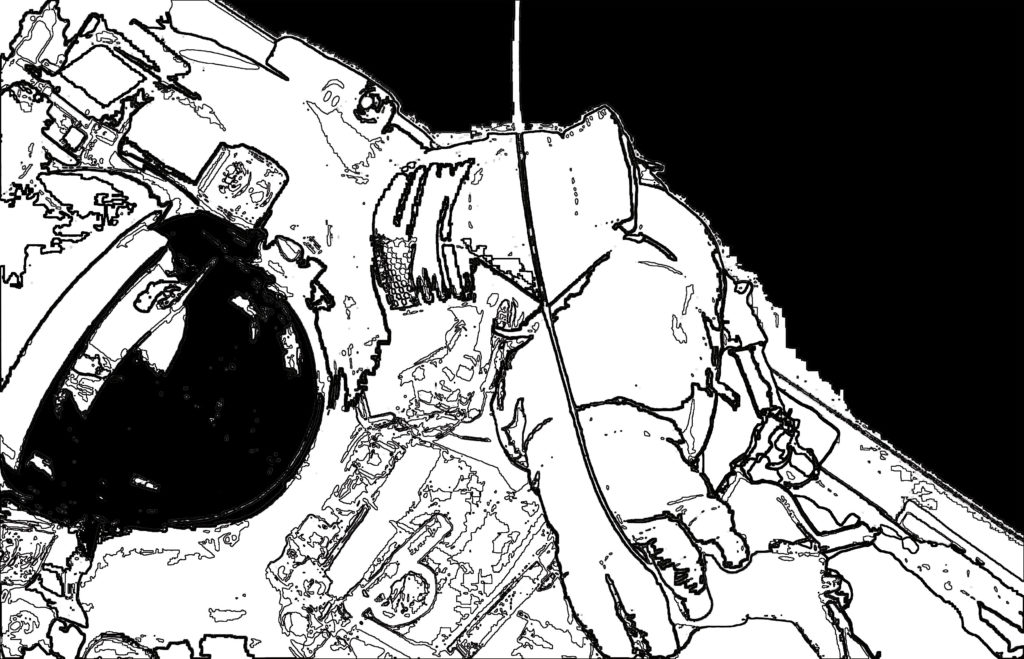 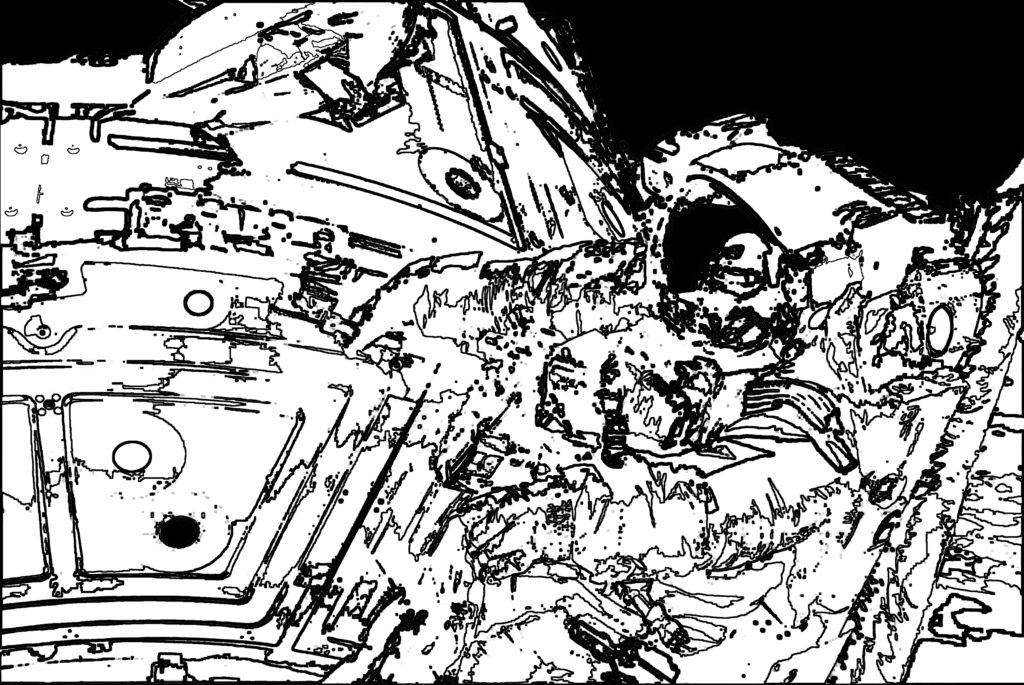 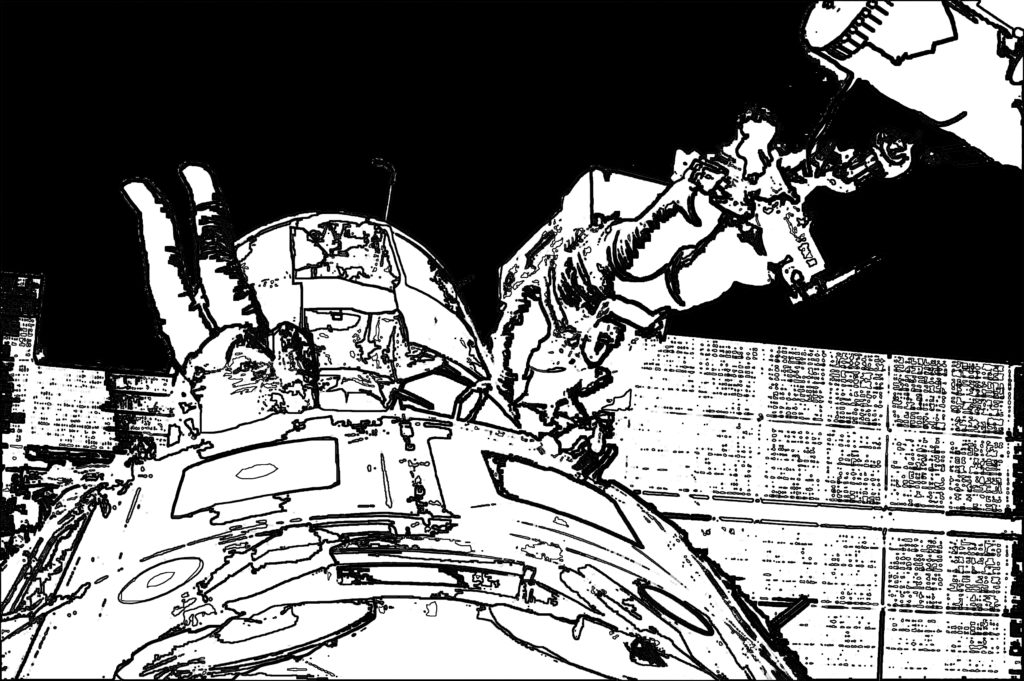 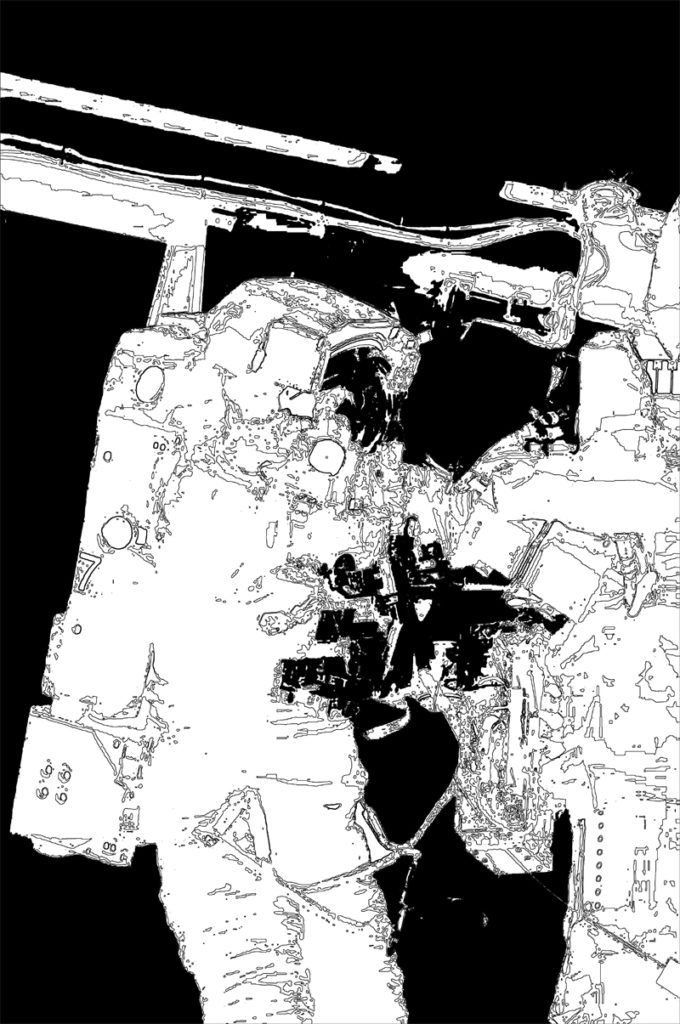 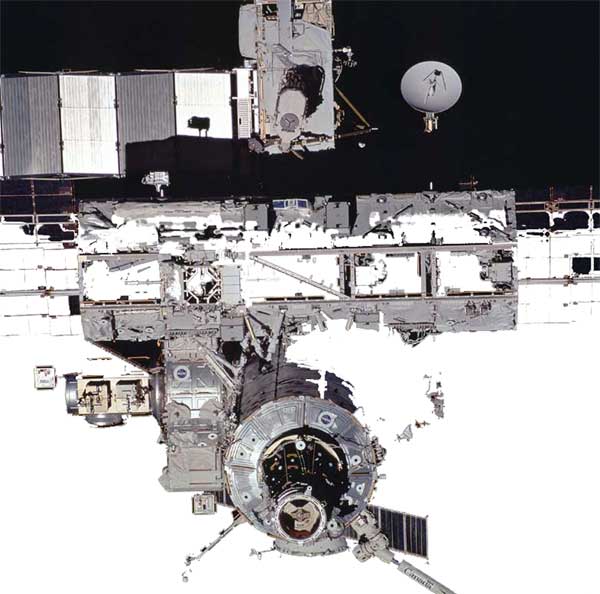 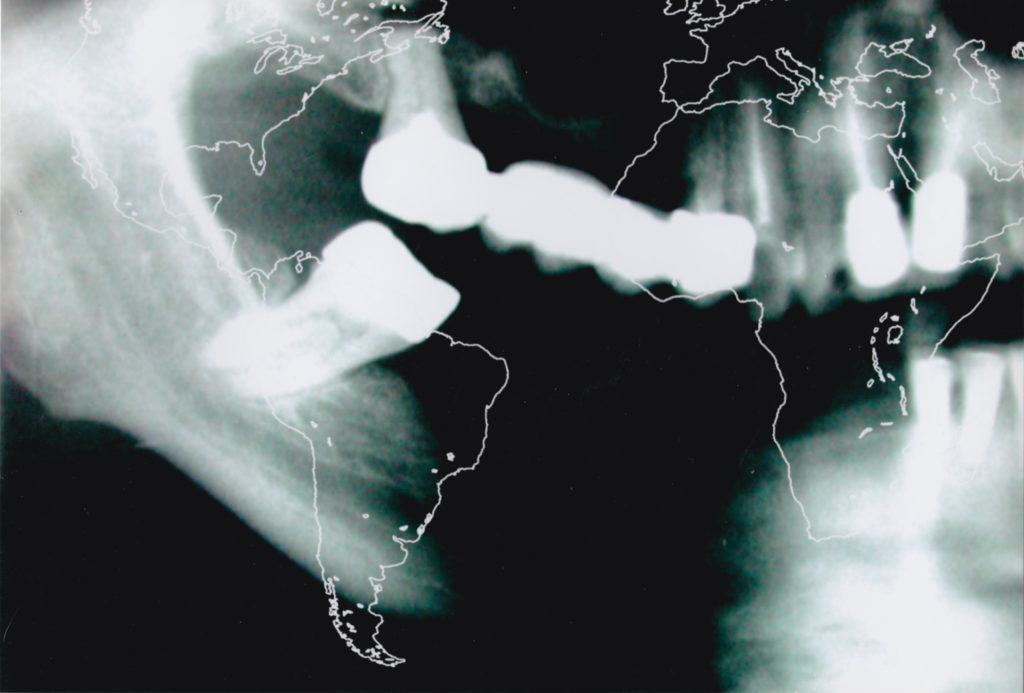 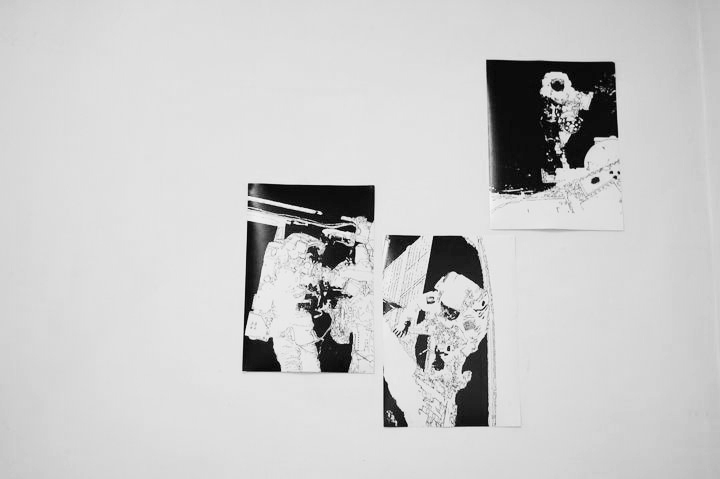 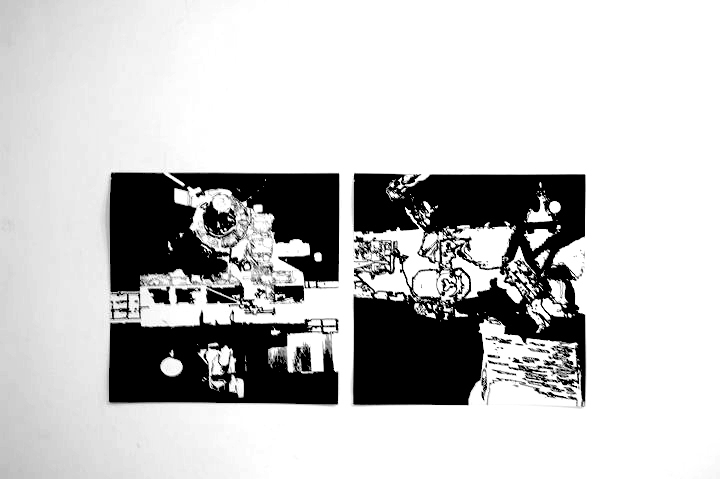 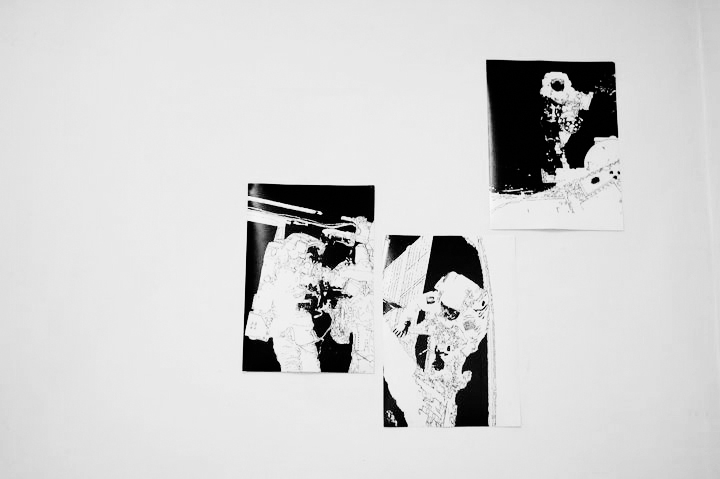 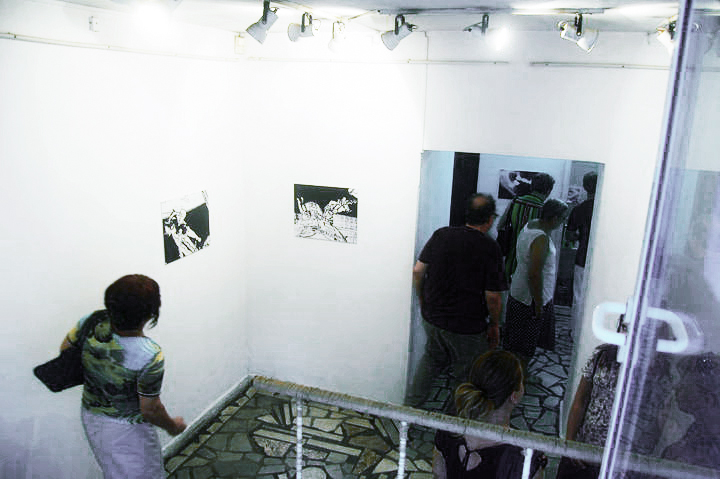 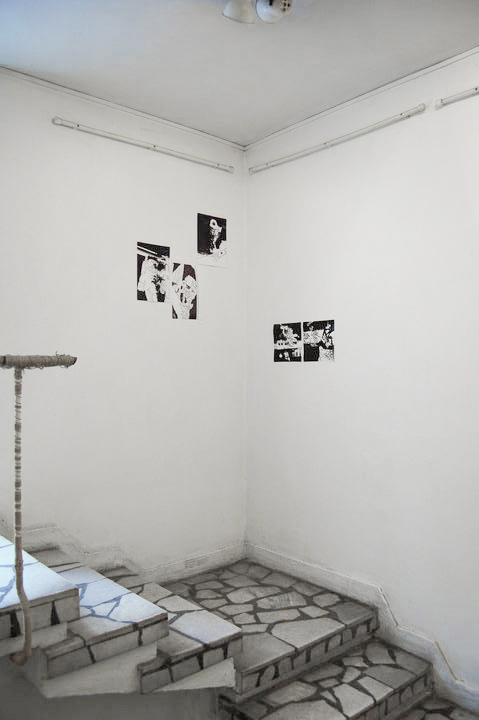 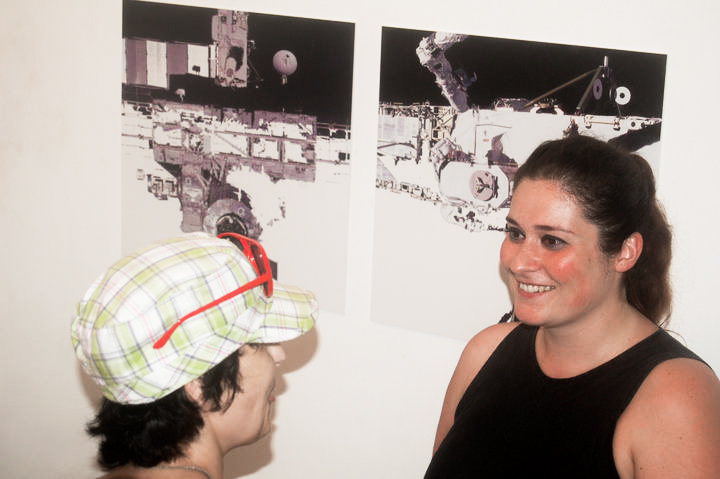 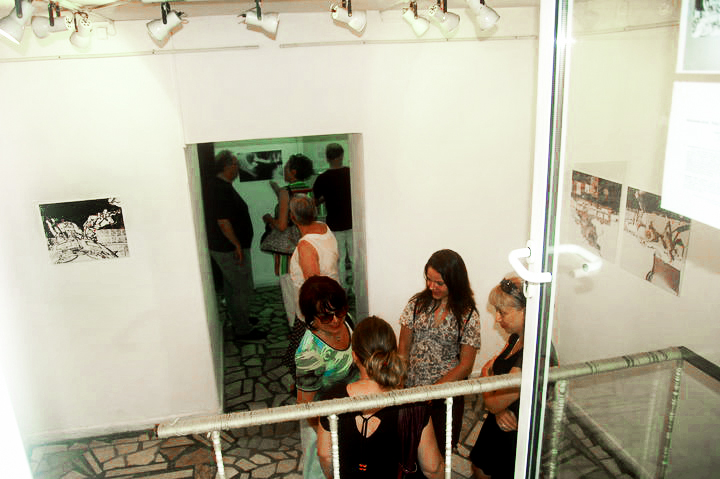 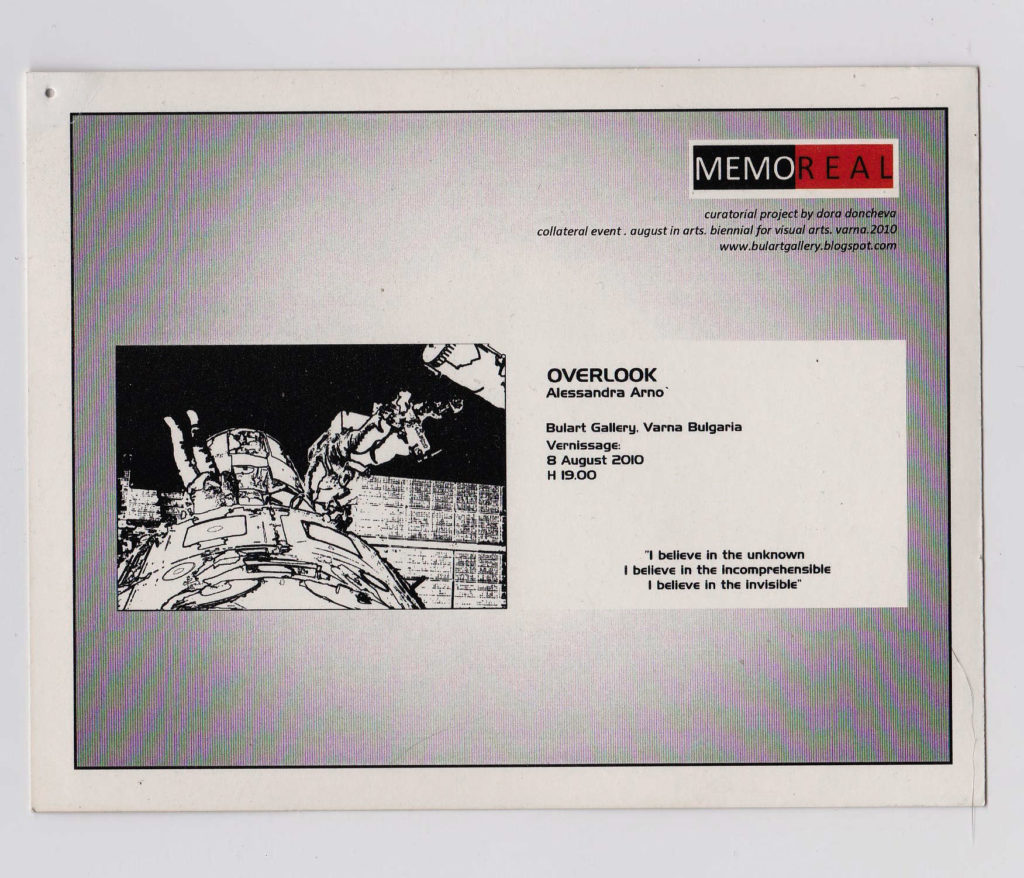 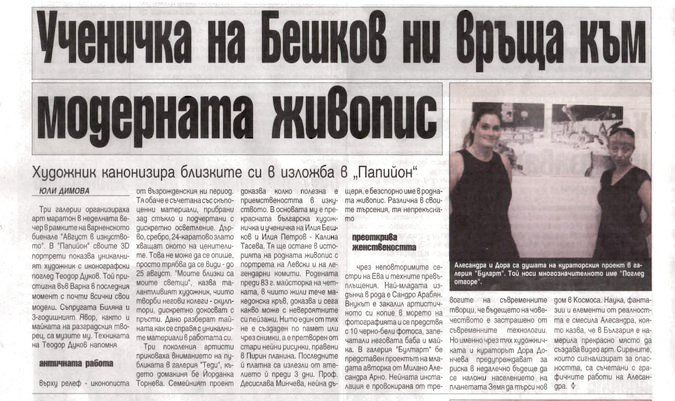